As a coaching group, the Kabuki Strength team are asked, “[What are the] Top accessories or technique for building 1RM strength for squat, for bench, and for deadlifts” on our Instagram Q & A. Obviously; the answer is predictable, “It depends. Without jumping onboard our remote coaching service, where we see and assess videos of your lifts, we won’t know and be able to give you a reliable answer”.

However, I can break down the principles and paradigms I work within personally when making exercise selections for my athletes. Hopefully, that will open the door for you to create a more individually efficacious plan.

I tend towards a very methodical exercise selection process, starting with a visual assessment of a lift. Usually, this is a video, ideally from the side on and from the front. These views allow you to follow and plot out the bar path AND kinematics of a lift. I’ll use kinematics interchangeably with bar path; it’s a little easier to picture it that way, but in the interest of understanding, bar path is literally how the bar gets from A to B. Kinematics is how the whole system moves to get it there.

Regarding assessing both the bar path and kinematics, I lean heavily on the research of Dr Megan Bryanton (her Research Gate profile). Dr Bryanton argues that bar and body movement observation aligned with biomechanical principles can indicate muscle group dominance. In turn, that infers the muscle groups that are limiting a lift. 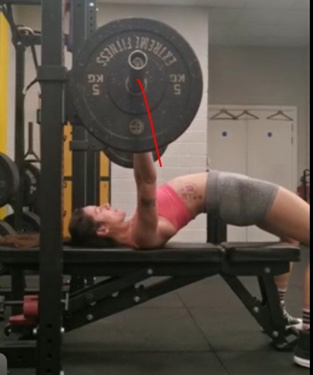 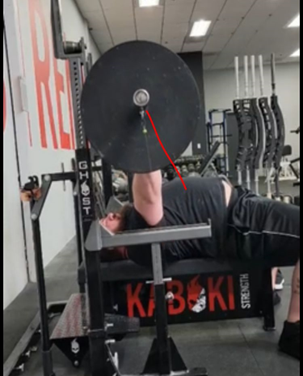 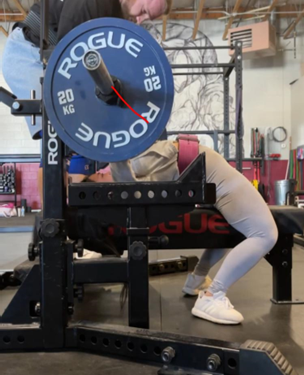 See figures 1 to 3 above (ordered from left to right); we have 3 Kabuki Strength athletes displaying different bar paths. In figure 1, we see an athlete that’s very new to bench pressing showing strong triceps dominance resulting in a very vertical bar path. Figure 2 shows a seasoned lifter hitting a 575 lb bench with a more minor but somewhat vertical bar path, potentially indicating a slight triceps dominance. Finally, in figure 3, we have an elite bench presser with a diagonal bar path indicative of a balanced profile. Conversely as chest bias, and dominance, appeared, we would most likely see a bar path that followed a more horizontal trajectory. On top of this, we’d expect a similar  angle increase or decrease in line with lifter qualification and experience.

Already you should be able to see how this would start informing us of potential developmental and preparatory exercises. However, we must always be careful of locking ourselves into a single way of viewing any problem. Once likely muscular dominance is indicated, a couple of questions work as a good litmus test. We’ll use the squat for this example:

Bearing the answers to these two questions in mind, we can progress with selection.

For the sake of this article, we’ll assume that there aren’t significant movement limitations that need to inform our decisions and that we have an athlete who understands what the movement should look like but can’t execute it under heavier loads.

At this point, it’s worth pointing out that we’d make a few assumptions about how a particular lift should look. Of course, some great lifters will deviate from this paradigm, and that’s okay. It doesn’t mean anyone is wrong, and they might be leveraging some extreme body proportions. But could you argue that, for the majority of people, if the load is distributed across more muscles, individual moment arms are shortened, and bar displacement is low, it would be a stronger lift.

With all that explained and the first step down, we can start looking at actual exercise selection. Beginning with some decision heuristics, these give a base where I can make informed decisions. These aren’t guaranteed to be correct, but they are a great starting point.

Below is an example of the exercise selection/intervention hierarchy I use, 1 being the intervention most likely to have a direct carryover to the competition lift and 5 the least.

This then layers over two more main factors:

Point 1 is a conversation for another day. Point 2 would ask how a potential exercise aligns with the competition lift (or any movement that is a primary or secondary key performance indicator). There are, however, other heuristics to help you decide on, or add potential layers to, exercise classification and likely dynamic correspondence.

Now, this list is certainly not exhaustive, and you could continue ad Infinium, but for our purpose, it suffices.

For the sake of variation, and so we can explore more examples, we’ll shift to a competition squat.
Using a Barbell Back Squat, Good Morning with Transformer Bar, Pin Squat – below parallel, and a leg extension as exercise examples for an athlete with a traditional Hip Bias/Chest Fall squat pattern with the goal, as we are generally powerlifters, is increasing their competition squat. Below are some of the answers to the above dynamic correspondence questions for the examples as reference material:

First, let’s look at how these exercises line up within the rubric of our intervention heuristic:

How do they line up within that exercise classification spectrum compared to a Barbell Back Squat?

Now we have a little more information to make a decision regarding how the exercise selection is going to look. We have 1 exercise that matches our 1RM Back Squat (ie. the Back Squat). But this falls outside the original question about accessory/secondary exercise selections. 2 exercises could be excellent because they are second-level intervention choices, and both are close in terms of load potential. However, I’d tend to choose an exercise with matching movement patterns and force vectors over not. In this case the pin squat more accurately addresses the muscular deficiency.  In terms of direct improvement, the leg extension comes at the bottom of the pile.

Now we can start talking about the intent and execution of developmental movements. Remember, we’re specifically talking about an athlete with a chest fall pattern derived from a hip dominant bias in the Squat (this is a knee extension deficit). Even when we run through this system, we may still be left with hundreds of choices. On the spreadsheet I use to complete this whole process quickly, I have 20 exercises that match all the parameters for the back squat. Forty-two exercises match all the parameters except load potential (either Very High Load Potential or Medium Load Potential representing a single step away). Then 131 exercises that match pattern and force vector only, and this list are in no way exhaustive. The subsequent decisions are:

After all the above, even when you have selected a movement that biases towards building the deficit, an athlete needs to understand the intent and direction of an exercise. In this example, it’s very easy to let your hips shoot early on a pin squat. If, as an athlete, you don’t understand that defeats the point of the drill, then you aren’t to blame for executing it wrong.

Finally, to show this in action, I’d like to share with you the squat numbers of a lifter I started working with following USPA Drug Tested nationals in preparation for the upcoming IPL World Championships. The point is this isn’t a beginner; it’s an athlete preparing to break a world record.

This chart represents the cumulation of intelligent exercise selection and all of the processes above. The same progress is happening with the deadlift and bench but remember, it’s not just the result of a single exercise selection. Program design, understanding intent, teaching better foot and bracing mechanics, and a very coachable athlete have all played a role in this.

You can find further information about exercise selection, program design and 1-on-1 coaching HERE.